Unfolding the life of Peter Gentenaar...


Born in 1946 in the Netherlands, Peter Gentenaar concerned himself with paper making, after his early works as a printmaker led him to the realisation that his engravings had such deep relief, that commercial paper could not fill keep up.

With the invention of the vacuum table in 1978, the Hollander beater for long fibers in 1991 and the handmade paper press in 1991, (Inhabitant, 2013), Gentenaar became fascinated by the manipulation of paper forms; “slowly I turned from a paper user into a paper and pulp maker and while doing so found endless amounts of new possibilities for shapes and forms of paper.” (Gentenaar and Torley, n.d).

Gentenaar’s inspiration lies in the work of other paper artists, along with his love for nature. He likens his sculptures to a delicate leaf in nature; “My inspiration is a bud, which, in spring, unfolds into a leaf. A compact folded form feeds itself with water and turns into a great spacious form. In autumn this leaf falls of the tree, the water evaporates and a small web of fibers curling around the spine is the end of this form.” (Geentenaar and Torley, n.d).

His works are truly remarkable in that they explore an alternative method of paper construction, offering us a different perspective of paper, and how it can be manipulated to take different forms. As art concerns itself with the interpretation and objective views, this is an important element to consider in teaching our students.

Gentenaar’s works are enthralling, and can be admired for their originality and vibrancy. We should share this appreciation with our students. Through the exploration of Gentenaar’s cultural background and artworks, individuals can engage in artistic analysis, and begin to make connections between artistic intentions and the factors that influence the various forms that artworks take.

Gentenaar has experimented with the formation of leaves and the beauty of nature, and in fact nature is a guiding influence that shapes the majority of his works. Gentenaar remarks; "In my artwork, I bring my love of nature, its materials and my fascination with technique together.” (Gentenaar and Torley, n.d).

He uses bamboo structures as supports in creating paper, to mirror the spine of a leaf, incorporating other basic forms (triangles, squares) to show the distinct effect of prolonged drying of the pulp. The paint used can bleed into the pulp, giving the sculpture a glazed look. The bold dyes that are added to the pigments and fibers during the paper making create a beautiful display of colours that will engage students, making them excited to learn, and produce their own paper sculptures.

In investigating the works of Gentenaar, students will:

-Develop an understanding of how paper is made

-Interpret the features of an art work and focus on different elements, considering the process involved in its production, not just the product (students will engage in ‘Learning to see, seeing to learn’ practises). 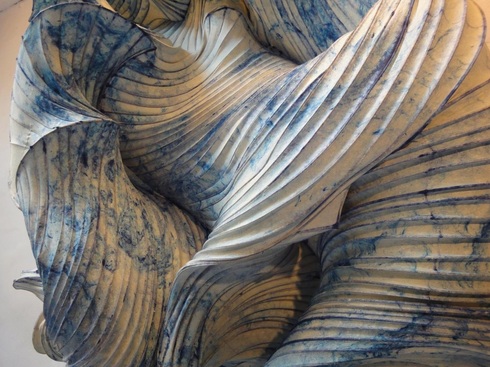