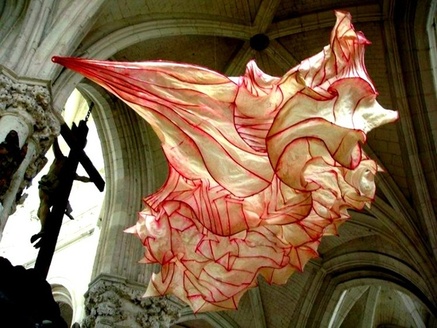 The Australian Curriculum for the Assessment and Reporting Authority (ACARA) strand:

Sustainability: exploring the qualities of materials that impact on the environment by selecting resources, considering their potential for recycling. (Paper focus)

In The Arts, the sustainability priority provides engaging and thought-provoking contexts in which to explore the nature of art making and responding.

Achievement standard: By the end of Year 6, students use skills, processes, materials and technologies to create and display visual arts works. They plan, reflect upon, refine and document their visual arts
ideas and processes. Students identify practices and viewpoints and their inter-relationship in visual arts works they view. They make connections between their own and others’ artworks using visual arts terminology.

Students explore how visual arts works have been re-conceptualised across cultures, times and places

In keeping with the subject matter of “the environment,” for the grade six curriculum in the “Visual Arts” band, students will demonstrate an understanding of the way that paper is made, and contrast this with how Peter Gentenaar creates paper for use in his sculptures. Students will developing a mindmap on bubbl.us.com to depict initial thinking and the differences found after research.

Students will engage in their own research about paper- making, devising three questions that they would like to research further.

The mindmap that is produced has clear links/ arrows connecting related ideas, and separate bubbles to indicate the distinct differences between paper-making processes

Students recorded in their workbooks, an accurate list and description of, the materials used by Gentenaar in making paper sculptures

Student- formed questions are reflective of key ideas that should be explored in research, and relate specifically to the discovery of how paper is made

Background to the learning:

Students have explored the cultural background of Peter Gentenaar, considered the influences in his life, and are now moving into an investigation of the technique used in creating his sculptures, analyzing in particular, how he utilizes paper- making technology and the materials he manipulates.

Computers to engage in research based on selected questions

Ipads with online access for use in the classroom

Web 2.0 technology- “bubble.us” software website for students to work on the creation of mind maps

“How is paper made?” (Initial class ideas are recorded on the Interactive whiteboard)

“How do you think Peter Gentenaar might change the paper-making process to create the sculptures in the way that he does? How might he achieve that overall effect?”

Teacher adds to the initial brainstorm in the introduction, recording student responses on the Interactive Whiteboard:

“What are some things we might want to find out about paper and the paper-making process?”

Students are encouraged to become active learners, not only volunteering their thoughts, but adding them to the Interactive Whiteboard brainstorm at the front of the room.

Students utilize the computers in the classroom to research their questions that they created surrounding the paper-making process.

Students must also explore a question discussed at the beginning of the lesson in the class discussion. It must be a question that is different to their own.

After 10 minutes, students begin research on the technique used by Peter Gentenaar in creating paper for his sculptures. Teacher directs their attention to the idea of making the differences in traditional paper making, and the method used by Gentenaar, clear.

Students begin creating their mindmap, joining connecting ideas and making sure that differences are easily recognized.

Created mindmaps are printed for display around the classroom for future reference, after grading by the teacher.

“What were some of the most noticeable differences between the traditional paper-making methods and the technique used by Gentenaar?”

“What was interesting about Gentenaar’s technique?”